Predicting the results of football matches based on other statistics

Many beginners try to predict the match regarding the winner or predict whether the total will be higher or the total will be less , not taking into account the odds given by the bookmaker for a certain event. Not comparing it to the odds of the event being bet on.

Such absurd statements are often found on the forums: “I think that Chelsea will win this game in 60% of cases, so I will bet on the victory for the odds of 1.5”.

This means that the author of the phrase is satisfied with the fact that his bet will play more often than not. It is quite normal for him that if she hits only 60% of the cases, then at a given coefficient at the distance, they will lose 10% of the bet amount. That is, when he makes 100 bets of $ 10 at the odds of 1.5, then on average he will lose $ 100 over the course. This is an easy calculation, but I think it is worth stopping at it so that no one asks unnecessary questions.

The calculation formula is presented below:

How to predict football matches correctly? How to calculate the outcome of a match?

In order not to lose money over a long distance, but, on the contrary, to earn money, you should only place bets that have a positive ROI on one of the outcomes. See what ROI is in a short video at the link . To find a bet with a positive ROI, it is necessary to predict the probabilities of match outcomes as accurately as possible. In other words, you need to calculate the probabilities as accurately as possible:

After that, it will be easy for us to find matches with a positive ROI on the outcome. Just multiply each probability with the odds for the same outcome set by the bookmaker.

Calculating the probability of the outcome of a football match

Let's say a football match between the national teams of the Czech Republic and Panama is announced. And we, using our calculations, calculated the following probabilities:

The office in which we want to bet money has put up the following odds for the game in the line:

If we bet on the win of the Czech Republic, it will have an ROI of -5% (minus 5), which means, in the long run, a loss of 5% of the amount wagered on this team.

The calculation is not tricky:

Are we going to bet on Panama? Then:

If the calculations of the probabilities of winning are accurate, then we should not bet on any of the teams to win. The correct action is to ignore the current bets or wait until the odds change.

Based on calculations, the ROI will be 2.4% for a tie. This is exactly what we need, because at the distance the profit will be 2.4% from each $ 1 contributed to the outcome without a winner. Thus, summing up, we can say that all we need to make money by betting is to learn:

then we can easily

Now that the understanding of the need for training and an accurate determination of the probability of the outcome of an event has come, let's move on to training in predicting probabilities.

For predicting the probabilities of any event, science is responsible - probability theory and statistics. Here is a list of references that outline the basics of these sciences:

Probability theory is a mathematical science. Therefore, to predict the probabilities of the onset of a particular event, mathematical models are developed. The task is to create the most accurate model, because the more accurately the probabilities are calculated, the more reliable our rates, respectively, the ROI will be higher.

Forecasting sports events. What data should I use?

When creating any model that predicts probability, think about what type of data it will be built on?

Predicting the results of matches in basketball

For example, in basketball , various forecasting systems can be built on the points scored by a team in a match. It is known that there are a lot of these points in every game, and therefore in every season. In the NBA, there are many matches per season, so the database for predictions in each season is collected quickly.

I have seen many examples of calculating total in tennis. And all of them were based on past matches, trying to predict how often the match will end more or less than the total indicated in the bookmaker's line. This is absolutely the wrong approach! To predict the total, it is necessary to create a model that will determine the probabilities of each number of games. That is, after the model has made the calculations, we need to know what the probability is that there will be exactly 14 games in the match, what is the probability that there will be exactly 15 games, 16, 17 and so on.

If tennis doesn't have the ability to predict probabilities based on sets, how do you do that? It is possible to use the results of the games. But even with them, not everything is so smooth. The number of games played by a tennis player is still insufficient.

Tennis is a solo sport, which means that the player's current form has a big impact on the probability. Therefore, the models are built only on the basis of the latest data, because the indicators for several months are no longer accurate, due to the difference in the condition of the athlete's form. Another stumbling block is that games are not always recruited in a linear fashion. For example, it is impossible to play exactly 11 games in a set, which affects the prediction of the total. The analysis showed that the probabilities of ending a tennis match with a different result are most accurately predicted on the basis of data on the probability of winning one rally.

The figure below is a diagram on the basis of which the Monte Carlo model in Excel is built. We advise you to perform a similar construction, an interesting practice. 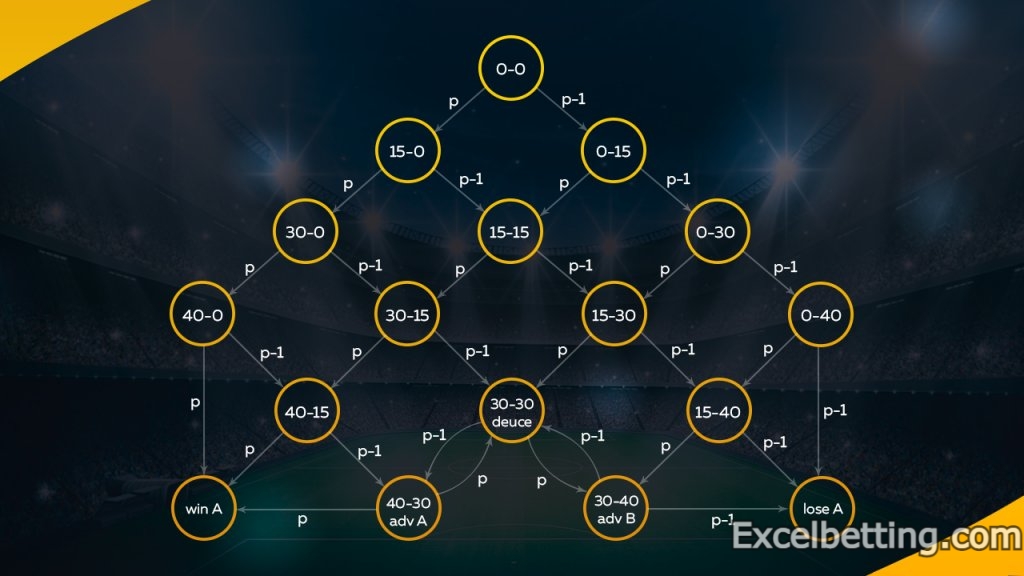 Predicting the outcome of football matches

Let's go back to the analysis of football betting. What indicators to use when building a model? Someone will assume that these are the results of past matches, namely goals. We suggest looking at the game from a mathematical point of view in order to prove the frivolity of this event. Football is considered the most volatile sport, and we are able to confirm this.

Of all the sports on which the offices accept bets, only in this game is the option when the team that owns the initiative hits the goal several times more than the other, but is defeated. Any fan has watched a match in which a flurry of blows is delivered to the goal of one team, but the team wins by firing just a couple of "shots" in response.

This is because football differs from other sports in its low performance indicators. A good half of the attempts to "take the gate" have a chance of success in less than 5% of cases. And only a small number of "shots" exceed 30%.

It is hard to imagine that in a handball match one team could throw in the direction of the opponent's goal 30 times, and the other - 3 times, and the second team would celebrate the victory. It is clear that the second team has no chance of winning at all, because the probability of hitting a target in each throw of this team game is an order of magnitude higher than in sport # 1. In this regard, the team that made 30 shots will score at least 10 goals even in the worst hands, with the best hands it can score 25 times out of 30 shots. It turns out that the team with 3 tosses does not claim to win at all. In basketball, a similar picture is also observed: a team that, as a result, made 10 times more attempts to score the ball into the ring than an opponent, will win in any case.

The closest thing to football is hockey, but there is less variance, since more shots are delivered per game and goals are hammered more often. There are also more games in hockey. However, the hockey variance is also very large, which makes it impossible to build models based on the result of the match.

Again, the question arises of how to calculate the probabilities of the outcome of a football match? There is an option to build a forecasting model based on smaller elements of the game than goals, namely, shots on goal and possession of the ball. Let's briefly describe how the systems worked several years ago and how bets were made by people who had not watched a single match in a year.

When I was living in the Czech Republic, I met one successful bettor from Germany. His name was Paul. I happened to see how he bets on football and what systems he uses. To obtain information about the probability of a particular outcome of a match, he first calculated the probabilities of possession and shots. For example, in a match between Lyon and Marseille, they calculated the following ball possession probabilities:

Predicting the results of football matches based on other statistics. We recommend that you use betting software that analyzes matches with Excel because it is fast, convenient and easy, and you have complete freedom of action as well as various filters according to which to determine the best betting options for you.

What is express betting?

How to win on risk-free bets: life hacks for beginners

Why to use Sports Betting Spreadsheet